Good to hear a Cetti's singing in one of the regular spots so hopefully still holding on, apart from that very quiet & Flagpoles just a few Herring Gulls which has been the situation for the last few days.
Posted by wdigbirder at 15:51


A.Rogers,R.Stonier,C.Grayell,R.H.Davies,S.Berry,G.H.Rees,C.Benson,R.Wilkinson,C.Hurford,R.Liford, P.K.Grennard,P.Murray,S.Murray,E.Pugh,B.Gibbs,P.Mahiques,M.Jones,J.Faithfull,D.Astins,W.James ,Chris Jones,Clive Jones, Ceri Jones,M.Hipkin. Apologies to anyone I’ve missed or if I unfortunately don’t know your name.


Rarity description species sightings are all included & are of course subject to future acceptance by the relevant committees.


During the year 104 separate day or part of day watches recorded a total of 59 species of bird into the seawatching records, 4 species of Cetacean & Ocean Sunfish.


Pale Breasted B b hrota:


Dark Breasted B b bernicla :


A group of 7 were seen on 7th November.


A single bird on 22nd September was the only record.


A good run of birds at the end of August with a single on 29th , 2 on 30th & another single on 31st. If accepted along with the Great Shearwater records it is the first time both large Shearwaters have been recorded on three consecutive days at Strumble.


A very good passage during the last two weeks in August with single birds seen on 17th & 24th then 4 on 29th, a good count of 10 on 30th & finally another 2 on 31st. As with Cory’s Shearwater if accepted then it is the first time both large Shearwaters have been recorded on three consecutive days at Strumble.


Quite a poor year, 22 birds in total recorded on only 9 days maximum 6 on 30th August. The low number this year almost certainly attributed to September usually being the peak month traditionally for “Sooties” & the wind conditions this year were very poor in seawatching terms during that month.


As with Sooty Shearwater a poor year for this species, recorded on 21 dates between 11th August & 22nd October max. 14 on 4th October. Only two double figure day counts this autumn & no early year winter records.


Only 4 recorded this year, a single on 11th May & in autumn 2 on 21st October & a single on 19th December the latest ever recorded at Strumble & in the county.


At Strumble Head a total of 47 birds were recorded on passage max. 15 on 30th August.


A single bird past on 22nd October.


A reasonable return of 28 birds past. The maximum count was 11 on 11th August.


Quite a low count with only 11 recorded, 10 in August & a single in September.


Singles on 27th July & 16th August were the only records.


A single 1st w was recorded on 8th January then in autumn 53 passed on 9 dates between 24th August & 19th December max. 36 on 21st October .Breakdown of individual plumages during the autumn were, 15 Pale Phase, 3 Dark Phase & 35 Juveniles.


In spring a single Dark Phase bird was recorded at Strumble Head on 11th May. In the autumn 201 birds passed on 31 dates between 11th August & 3rd November max. 50 on 21st October. Breakdown of individual plumages during the autumn were, 69 Pale Phase, 111 Dark Phase & 21 Juveniles.


The highest day count of the year of 7 was on 21st October then all other records were of single birds on 11th, 17th,18th & 31st August, 4th & 22nd October then 11th  December which was the latest date ever recorded in the county for the species surpassing the previous record by 8 days of a bird seen at Strumble Head on 3rd December 1999.  The birds seen on 11th & 18th August  were adults with all the remaining birds recorded juveniles.


Another very poor year for this species at Strumble Head with 2 Juveniles on 27th August an Adult on 29th of the same month & another 2 Juveniles on 21st October being the only birds recorded.


An increase on 2013 where in the Autumn 550 birds were logged on 30 dates between 25th July & 19th December max. 54 on 23rd August. The two recorded on 19th December are the latest ever record for the species in the county


Recorded throughout the year, large numbers moving on passage during the late autumn.


As with the previous species, recorded throughout the year with sometimes large numbers going through in the late autumn.


Recorded on 87 of the 104 watches, numbers on some days in the autumn in excess of 50 individuals.


A total of 92 animals recorded. Only not recorded in January,June. July & December. The maximum daily count was of 14 animals on the evening of  11th May.


The total of 12 recorded in 2014 was up on previous years, 10 were recorded in August & 2 in September. In the last few years very rarely recorded outside of these two months.
Posted by wdigbirder at 18:27

Cuckoo calling all day yesterday seemed to be ranging from mountain to coast path.  Today I confirmed my suspicion and proved that there are in fact two calling birds - one by the mountain and one on the coast!
Posted by Richard Stonier at 19:51

A singing Wood Warbler in the woods at Llanychaer this morning
Posted by Steve B at 08:19

Quiet as expected but a few Porpoise were seen & 2 Shelduck east were the highlight birds.
On the ground still a few Wheatears moving through & the Merlin still about.
Posted by wdigbirder at 18:22

A walk round & an hour plus seawatch was fairly quiet in the strong Southwesterly wind. Out to sea a few more Manxies going through, higher numbers than yesterday & quite a few Porpoises showing well today. On land the hirundine numbers much lower than yesterday & 4 female Wheatears between Lighthouse & the stile for Richards Valley, a couple of them looking very good for Greenland.
Posted by wdigbirder at 15:56

Spotted Flycatcher back in the garden this morning.  As far as I could tell it wasn't here yesterday.
Looking at weather it probably wishes it wasn't here right now!

Cuckoo calling yesterday evening and visible perched up on coast path fence - just beyond Porthsychan.
Posted by Richard Stonier at 11:32

It was obvious before I pulled up at the parking area that there was a large movement of hirundines under way this morning. During the next four hours many hundreds of Swallows were moving West with smaller numbers of House & Sand Martins but theses still must have numbered over a hundred of each species. Five Swifts were my first of the year & a single Merlin put in a brief appearance much to the alarm of the hirundines. On the ground four Wheatear were at the old coastguards & Whitethroats now back in evidence & a couple of hour seawatch  brought my first Manxies of the year, but otherwise quiet at sea.

After a trip to Somerset yesterday decided to stay closer to home today.  Usual walk around Porthsychan and coast path to Lighthouse.

Lots of Chiffchaffs and Whitethroats singing.  Lesser Whitethroat singing continuously at the bottom of Porthsychan valley.  Three Common Sandpipers on Porthsychan beach.  Fall of about 20 Wheatear in the small field at the head just below the old coastguard lookout.
Posted by Richard Stonier at 14:19

Email ThisBlogThis!Share to TwitterShare to FacebookShare to Pinterest
So I saw a distant dark bird speeding low over the sea about 800 yards away... At 50 times optical zoom my trusty Canon bridge camera confirmed my strong  suspicion it was a Peregrine! 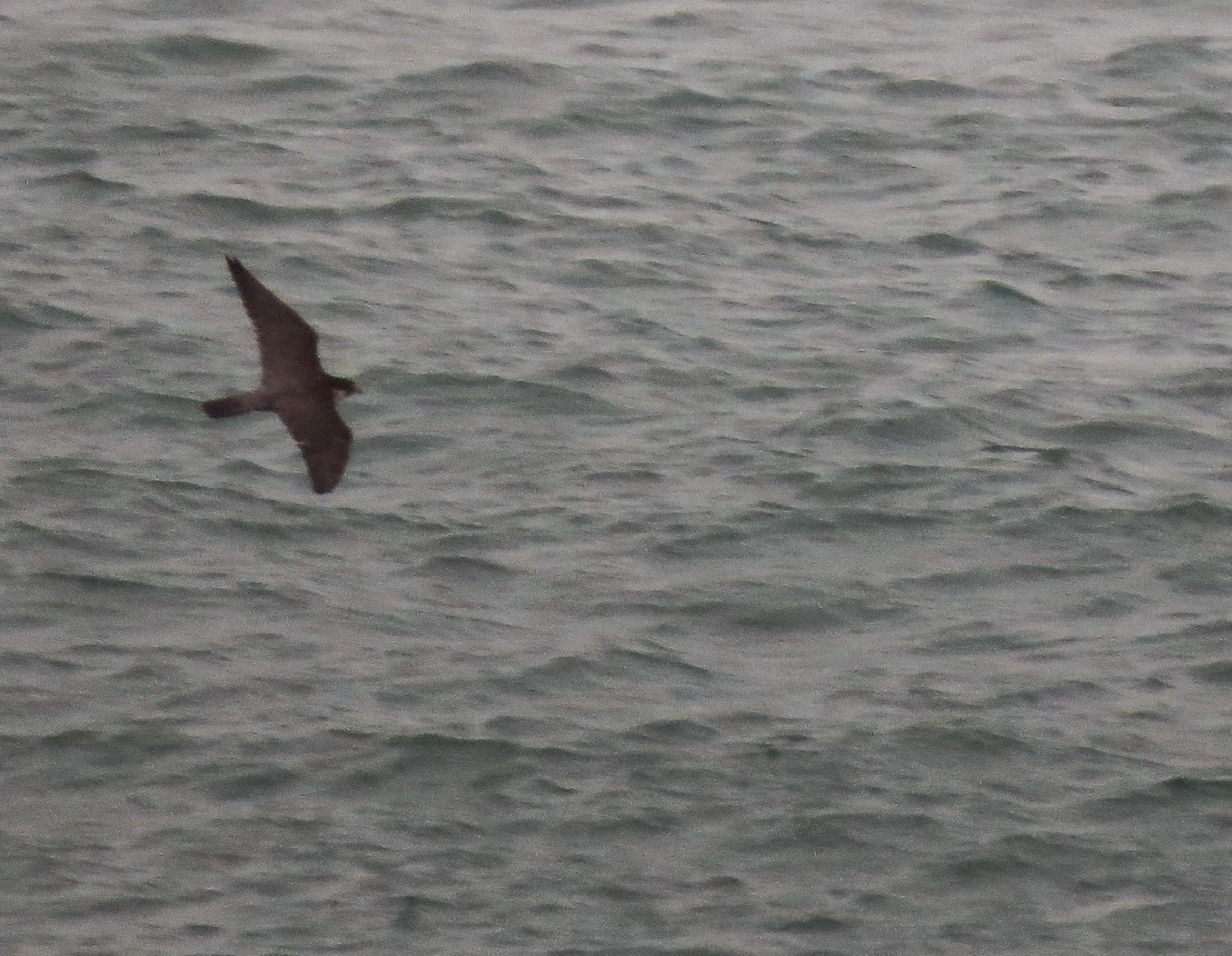 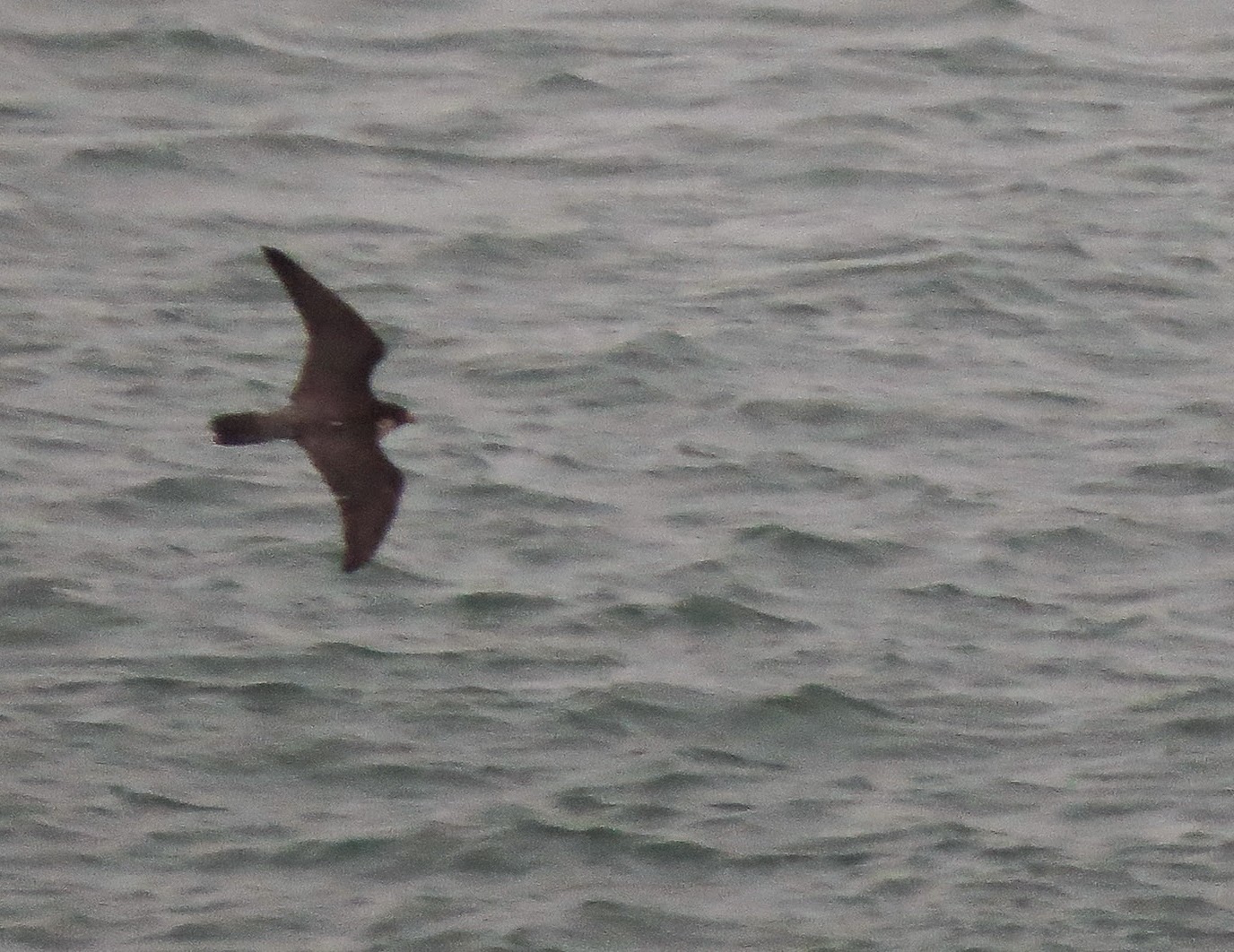 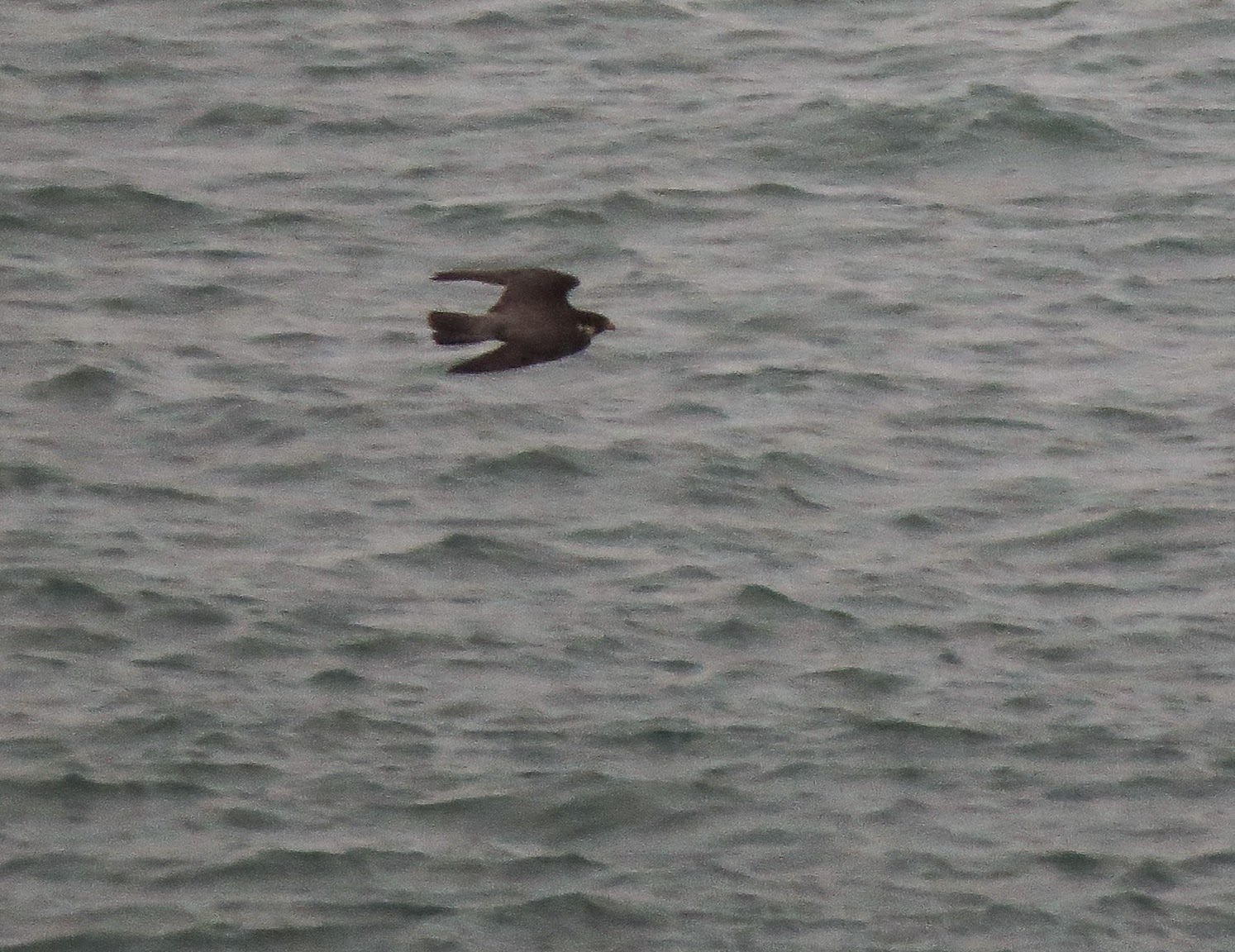 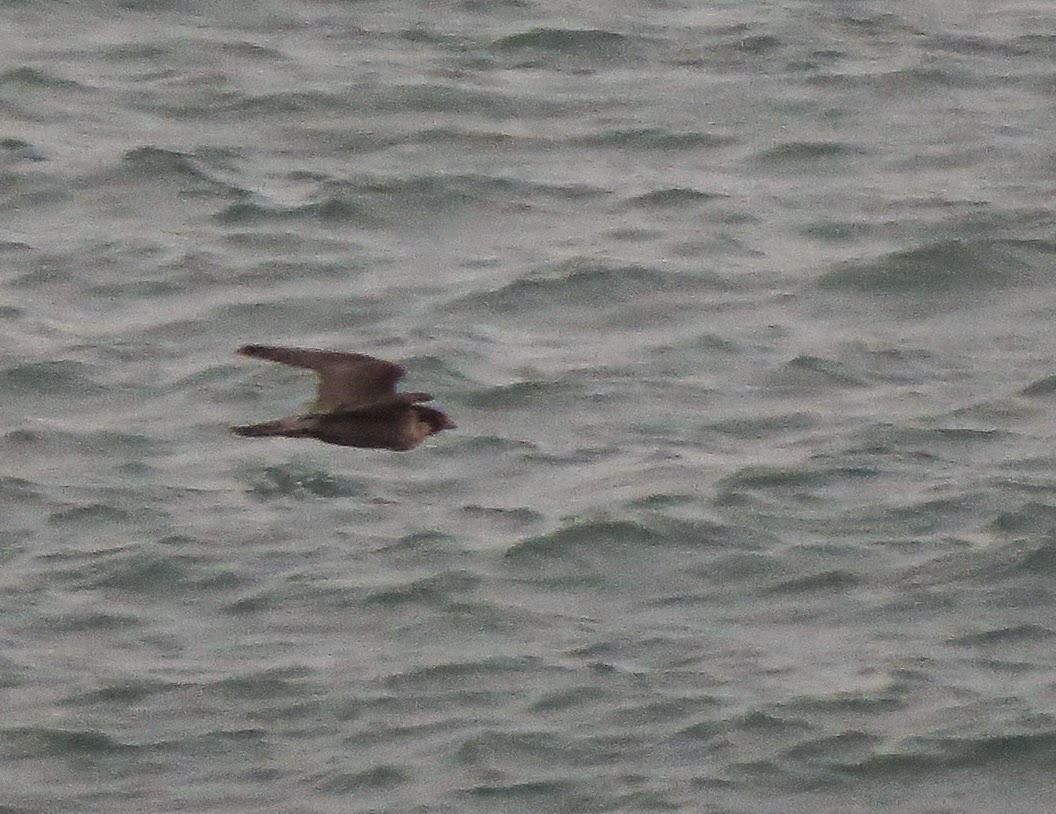